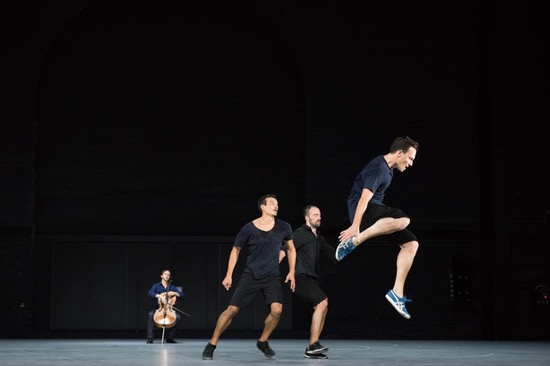 When I think about the works by the brilliant Belgium-based choreographer Anne Teresa De Keersmaeker that I’ve seen over the years, I realize how the different New York spaces in which they were performed affected not just my eyesight, but my feelings. That idea slid into my brain last week, when I was watching—experiencing—her and four members of Anne Teresa De Keersmaeker/Rosas perform her 2017 Mitten Wir in Leben Sind at NYU Skirball.  Shortly after its New York performances, a re-imagined version of the musical West Side Story was to open, and the Jets and the Sharks will be dancing De Keersmaeker’s choreography (the mind boggles).

I
first saw her early pieces in New York dance studios, pondered her
ever-circling 1980 solo, Violin Phase,on a sand-covered floor in the atrium
at the Museum of Modern Art, and in 2018 experienced her The Six Brandenburg Concertos in the vast Park Avenue Armory. In
the Baryshnikov Center’s black-box Jerome Robbins Theater in 2014, the three
dancers from her company came so close to the audience in Verkläerte Nacht that at times you could have reached out and
touched them. At MOMA in a deconstruction of her 2013 Vortex Temporum, a dancer might even occasionally place a hand on
one of the spectators ranged around the atrium.

De Keersmaeker considers time as an element, and not
just musical time. We New Yorkers saw her En
Attendant and Cesena  at the Brooklyn Academy of Music, but the
first of these premiered in Avignon, France, in the Cloister of the Celestines
as dusk moved into night, and the second took place from dawn to full daylight
in an amphitheater of the palace occupied by the Pope during the Papal Schism. Mitten Wir in Leben Sind lasts for an
intermissionless two hours.

Her knowledge of music
and her sensitivity to it are wide-ranging. She has choreographed pieces to
music written in her own time and ones created centuries ago by Johann
Sebastian Bach, Gyorgy Ligeti, Arnold Schoenberg, Gérard Grisey, John Coltrane,
Steve Reich. In Vortex Temporum, each
of the six dancers is paired with one of the Ictus Ensemble’s mobile musicians
playing Grisey’s spectralist composition, but not always in obvious ways.

Mitten Wir im Leben Sind is set to Bach’s six suites for solo cello and involved—involves— an intense collaboration between the choreographer and the superb onstage cellist Jean-Guihon Queyras. In Anna Magdalena Bach’s notebooks, the works are labeled Suites à Violoncello Solo senza Basso (Suites for cello solo without bass). The German words of the dance’s title make up only half of the enigmatic opening line of Martin Luther’s 17th-century hymn and an even earlier Latin text: “In the midst of life we are in death.” The second half of that text lurks like the “hidden” bass line that underlies the melodies played by Queyras on his beautiful cello (made by Gioffredo Cappa in 1696) and reminds us of the death that supports every flowering of life. In the text, the words that follow invoke the awaiting God.

That
doesn’t mean the compositions are remorselessly melancholy. Each one begins
with a prelude. But the succeeding six pieces in each are baroque dance forms:
allemandes, courantes, sarabandes, minuets or bourrées or gavottes, and
gigues—some running rapidly (the courantes), some rapid and sprightly (the
gigues), some singing slowly and sadly (the sarabandes).

The stage has a grim reality. It is bare of scenery, and the several light switches, plus a door for loading scenery into the space, are black. Yet lit in various ways by Luc Schaltin, the place becomes transfigured. At one point, for instance, the cellist’s shadow looms on a stage-left surface; at times, we can hardly see a performer or two pressing against the back wall; yet at the end, the light is almost unbearably bright and without emphasis. The gray floor, like the one in De Keersmaeker’s Vortex Temporum, shows faintly traced intersecting circles. Before each sonata, she and one of the other dancers carefully position and lay out across those curves straight lines of tape (maybe yellow, green, or red—it’s hard to be sure). These intersect or not; coming together, they form peaks like the points of a star. De Keersmaeker has described the floor plan as a “spiral, unfolding anticlockwise, steadily forming increasingly larger pentagrams. To tape these spirals has become a kind of ‘refrain’ to the whole of the piece, taking place between the suites. Previously, the floor pattern often remained implicit or invisible. Now we uncover the very tools with which the piece was made. It renders the performance even more naked by also showing this element.”

For each section, Queyras and his stool move to a different area on the stage and face in a new direction. To indicate each change, De Keersmaeker walks to a front corner of the stage and holds up the requisite number of fingers (okay, we are not lost; this is to be the fourth suite. . . .).

There
are five dancers in all: Bošjan Antončič, Marie Goudot, Julien Monty, Michaël Pomero, and the
choreographer. For a
while, De Keersmaeker, wearing sneakers and an intricately-cut dress by An
D’Huys, her gray hair in a French twist, performs alongside Pomero. They stay
close together, often in unison, but do not touch, seeing things within and
beyond the stage that we can only imagine. Sometimes they come close to a front
corner of the space and examine us. In a moment of rest, they stand almost
touching, one slightly behind the other, stretching their left arms out to the
side. This moment will be repeated later by other pairs.

What they do and what Pomero, dancing alone, spools out will also be reprised in the work in varying ways. He suspends a movement until he seems about to fall, then recovers into a faster series of steps. He turns and twists; walks, runs, leaps, skips, jumps—a marvel of thoughtful complexity. He spirals to the ground and up again. What gales are buffeting him? Or is he testing his balance on a shifting terrain?

Stool and cellist move to a new position. Green tape is laid out. Monty appears wearing blue sneakers. The music asks its questions. Occupying at first a small amount of space, he gives uneasy, restless responses, and I begin to notice how often the dancers bend deep to support themselves with a hand on the floor or spin down to it. Verticality yields to the horizontal. Gradually we meet the others as they come and go, De Keersmaeker ushering in each new suite and joining in sections of them. It’s a while before I notice that a green line of makeup streaks from her left ear down past her shoulder.

Goudot is the next person to appear. Her slimness isn’t that of a willow. Strong and swift in her delicacy, she can use her feet as if her sneakers were ballet slippers. For a few moments, she and DeKeersmaeker almost hold hands as they circle the stage. Antončič enters for his solo (he joined Rosas fifteen years ago, and, like the others, is mature in his artistry). When he falls, we hear the noise of it, and that deliberate choice enhances his recklessness. Veering and spinning, turning one way then the other, he seems beset by forces that he is determined to control.

I think it’s just before the fifth and penultimate suite that the cellist leaves the stage for a while. In the silence, I swear I hear distant music, but that may be my heightened senses playing me false. The beautiful sarabande is like a slow elegy. We hear only single notes climbing and falling, and Queyras seems to be playing a duet with his shadow. Long red tapes are laid down. Now all five dancers work in a darkened world.  Eventually, they lie supine, raising their heads as if not ready to yield to whatever is coming.

I’m
so overcome that my notes sprawl over mis-numbered pages. I can’t say when the
fifth suite moves into the sixth. I know that the dancers recover to run, leap,
hop. To move swiftly or hold still. They recover and trace individual paths or
mark with their movements certain of the taped patterns on the floor. Perhaps
just a stretched out foot anchors one, perhaps another can be walked along.
They focus intently on those tasks. But there’s another terrifying vision. All
the dancers are inert —collapsed on the floor in different ways. One man’s feet
are draped over another’s body. Over all this stillness, the music sings out.
In retrospect, I think of the many children Bach lost to early deaths and the
horrifyingly large number of mortalities caused by the Thirty Years War, twenty
or more years before he wrote his first suites for cello.

As the two hours wind down,
the stage brightens suddenly and almost alarmingly. Now the music is
jubilant—gavottes, I think. Maybe a gigue. Queyras is centered at the back of
the stage, and the dancers, flocking together, then in a horizontal line, walk
to that distant border and slowly retreat. Finally coming toward us, they acknowledge
one another, sharing the feelings they’ve shared with us.