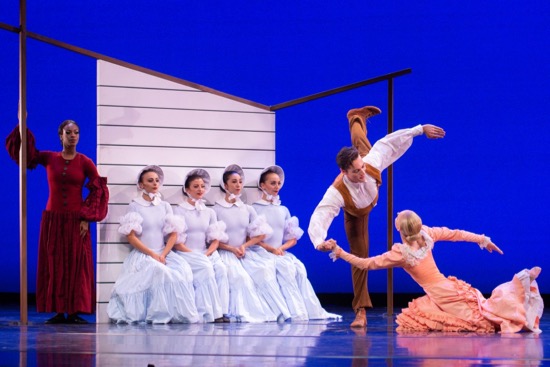 When Janet Eilber, artistic director of the Martha Graham Dance Company, stepped through Jacob’s Pillow’s front curtain to introduce the group’s performance, she mentioned that this was the 94th year of the MGDC, which made it the oldest dance company in the United States. Actually Graham’s history travels twistily backward even further, when she and the Pillow’s founder, Ted Shawn, danced together on the road. In 1960, lecturing from the stage of the theater that now bears his name, she wore a long taffeta gown with wide horizontal stripes in green and gold, and Shawn, as I recall, all but knelt at her feet.

The program shows something of the company’s artistic lifespan. It opens with Appalachian Spring (1944), flies forward to Maxine Doyle and Bobbi Jene Smith’s Deo (2019) and three selections from the 2007 Lamentation Variations, a project conceived by Eilber, to which fifteen choreographers have contributed over the years, then vaults back into a reconstruction of her 1936 Chronicle. We the spectators zigzag through fierce, spare early modernism and the great narratives of the 1940s to today’s different responses to time and space—all, of course, linked to the almost unstoppable artist, who appeared in the last dance she made for herself at the age of sixty-five and choreographed her last work at ninety-one.

At the Pillow, Appalachian Spring made its own nod to
history. The stage of the Ted Shawn Theater is not much larger than the very
small one at Washington D.C.’s Library of Congress Auditorium where this
masterwork made its debut. I love being so close to the performers, although
the recording of the beautiful score that Aaron Copland wrote for it sounds
almost abrasively loud. The lighting design is the one adapted years ago by
Beverly Emmons from Jean Rosenthal’s original vision.

As always, it’s up to the
performers to make us envision the sparsely populated countryside on which
stands the spare hint of the wooden house designed by Isamu Noguchi. There the
Bride and the Husbandman are wed and plan to start a farm and a family. The
Library of Congress stage had only one exit, and that certainly influenced one
of Graham’s choices. The couple, the Pioneering Woman, the Preacher, and his
four Followers enter an empty stage and never leave it until the dance is
ending. Instead, they freeze in space when not active (a strategy Graham
continued to use). When the Husbandman waves goodbye to his Bride and then
takes about six steps to a portion of fencing and, stays there while the dance
continues, he might in reality have walked out to a corral. The performers’
gazes need to travel beyond the actual perimeters of their domain (My only
cavil about Lloyd Mayor’s performance is that he poses looking down at the
fence, rather than far beyond the stage to the wilderness he expects to tame.)

Another such detail—or
rather, the lack of it—caught my eye. When the Bride is expressing both her
piety and her memories of youthful gaiety, the others are kneeling in prayer at
the rear of the stage, their backs to us. When Graham (seen in the 1958 film)
goes toward them and stops, she deliberately puts her hands behind her back;
it’s clear that she’s not quite ready to join them in prayer. I missed the
timing and expressive clarity of that gesture in Anne O’Donnell’s performance.

In the cast I saw (one of two), O’Donnell portrayed the excited and delighted young Bride charmingly, Natasha M. Diamond-Walker projected the Pioneering Woman’s serenity and neighborly concern, Lloyd Knight convincingly brought out the revivalist’s fanaticism, and his four sprightly followers (So Young An, Laurel Dalley Smith, Marzia Memoli, and Anne Souder) expressed their devotion to the Lord (and their more earthly devotion to their leader) with great enthusiasm.

Bobbi Jene Smith was once a
member of Israel’s Batsheva Dance Company, but met Maxine Doyle, the associate
director and choreographer of Punchdrunk’s Sleep
No More, when she performed in that work. Their Deo tells no story, but behind its images of loss, separation,
grief, and fury lies the myth that fed the two choreographers: that of Demeter
and Persephone. Smith and Doyle multiply the mother and child: Demeter, who
ravaged the earth after Hades kidnapped her daughter, and Persephone, who was
restored to her for six months of the year, so she could to make the earth
bloom before it returned to winter.

The music by Lesley Flanagan begins by blasting out several siren calls. Yi-Chun Chen’s lighting, punctuated by blackouts, often shows the scenes only dimly. We first see seven of the cast’s eight women, garbed in pale, flimsy gowns and lying supine on the floor. Leslie Andrea Williams, down right, swings an arm fiercely, her feet getting wider apart so that her entire body seems to be sinking into the ground; her gaze, however, stays upward. Blackout. Then a trace of light. The women on the floor raise their heads off the floor, lift their feet too, shifting in their strange sleep.

This kingdom of the dead is divided from that of the living. The women may exit the stage, leaving it to a solitary one of them, or stay and cluster on another side of the stage. In various ways, they kneel and convulse in unheard sobs. Often we perceive the stage as a place divided—a desperate individual in one part, a ghost army in the other or a tight clump, or paired embraces. Once, the women sit with their backs to us holding hands; pulling and leaning, they make that line ripple like a restless snake. When they exit in a line, they leave Diamond-Walker behind, still struggling.

After
intermission, we see a film of Graham performing her 1930 Lamentation in the 1940s. In this iconic solo, she’s shrouded and
sitting on a small bench. She strains against her tubular costume as if it were
grief itself; only once, at the very end does she stand up for a second before bending
even more deeply over. In her introductory speech, Eilber mentioned the Lamentation Variations in connection
with September 11, 2001, that terrible day when the twin towers fell. Its first
performance occurred on an anniversary of that terrorist attack.

Like
all these variations, Liz Gerring’s (set to Michael J. Schumacher’s “Zoltan’s
Ghost”) is short. It’s also very austere. Wearing a form-fitting black sheath,
Lloyd Knight performs a series of expansive or curled-in moves, while So Young
An, Alessio Crognale, and Diamond-Walker form a small chorus, leaping at times
across the space. Knight’s gestures are sometimes in synch with theirs, but
once he holds his hands about a foot apart in a way that could be related to
Graham’s way of holding wide the fabric that encases her. Now it seems an
aperture through which he can view the world.

Many
members of the company perform Michelle Dorrance’s variation, but I’m not sure
whether all seventeen who came to Jacob’s Pillow are onstage. We hear jazz bass
player Jaco Pastorius’s “Portrait of Tracy,” arranged by the tap artist
Dorrance to include her unseen rhythmic footsteps against the floor. The crowd
walks toward us, some turning to walk in the opposite direction. That kind of
regimented walking seems to be their way of life in a city of right-angled
streets. Sometimes a person kneels or squats. There are sudden stops.

At
the center of the stage and never ceding that place, is Knight, wearing a suit
and tie and standing between Jacob Larsen and Mayor. They crowd him, support
him—even cradle him on their raised flexed feet. But all three are in crisis.
Larsen and Mayor drag their mouths open in a silent yell, while Knight covers
his with his hands.

Aszure Barton’s variation is a duet, performed at the performance I attended by Ann Souder and Xing Ying. The music that accompanies them is “Apparition,” with its lamenting soprano voice, from George Crumb’s The Night in Silence Under Many a Star. They face us and move almost always in perfect unison. Twin towers indeed. You see traces of Graham’s Lamentation: the foot that clubs as it’s raised, the hands that plunge down into an invisible shroud or lift to wipe an eye. But the two look at each other at times, and small differences emerge between them. In the end, Souder walks away, and Ying is left sitting there alone.

None
of the three variations tells a story, but all are controlled, symbolic, and
somehow cloaked in dread and apprehension.

Martha Graham choreographed Chronicle in 1936, the year of the Spanish Civil War, in whose fight against fascism many young Americans participated. But she focused on images of fear and courage. All its three sections have subtitles. The one for the first, “Spectre–1914,” is “Drums—Red Shroud––Lament.”  Terese Capucilli and Carol Fried reconstructed this in 1994 from photos and film clips. In it, a woman (Leslie Andrea Williams in the performance I saw), sits on a low structure, her hair loose. She wears a black skirt so long that when she stands on the platform, it barely reaches the ground. When she lashes it furiously or turns it into wings or lifts it and lets it fall, it reveals its blood-red lining. When she raises its back hem over her head to form a hood and wraps the rest around her, she becomes even more fateful.

The
original score by Wallingford Riegger was lost at the time Chronicle was reconstructed, and its strongest section “Steps in
the Street” is (ironically, I’d say) performed to the finale of Riegger’s score
for New Dance by Graham’s rival Doris
Humphrey. “Steps in the Street” was revived in 1989 by former Graham dancer
Yuriko Kikuchi with the help of film clips by Julien Bryan and input from
Graham herself. The subtitles for this are “Devastation–Homelessness­––Exile.”

In
the striking beginning, the twelve women back onto the stage from various
places in silence, their bodies contracting, their arms wrapped around them,
their steps sharp but halting. They never turn and walk forward. There are many
stunning images like this. These black-clad women jump over and over, one leg
bent, travelling across the stage as they do so. They can march in two lines,
straight arms stretched forward, heads up, while attempting to force a woman
walking backward at a slant between their ranks to go with them It’s a triumph
that they can’t mow her down; they leave the stage and she’s still in place and
ready to summon them to battle.

“Prelude to Action” (“Unity–Pledge to the Future”) was the most recently reconstructed of the three parts. In 1994, Capucilli, Fried, and Diane Gray assisted the decades-before Graham dancer Sophie Maslow in reviving this section from photographs and film clips. The section isn’t as powerful as “Steps in the Streets,” but it’s still galvanizing. It brings back the platform and introduces a leader in a white dress with black trim (I saw Williams). She summons up an acolyte (Marzia Memoli), and then another, and pretty soon the entire army of women is rushing on and off the stage and, goaded by the percussive music, mobilizing into a unit under her direction.  Whoa!

From
1926 to 1938, Martha Graham’s first small group and the larger company that
followed consisted only of women. Powerful women. Deo is part of the ongoing Eve Project that refers back to works
like Chronicle. What strikes me about
the company now is how intense, intelligent, and, yes, empowering, today’s
superb dancers’ commitment is to works made before they were born in addition
to those created for them. I may find fault with some small aspects of their
performing in Graham works, but I applaud them all, as well as Eilber and
executive director LaRue Allen, for keeping these pieces alive, even as they
fuel the repertory with new, but related pieces.